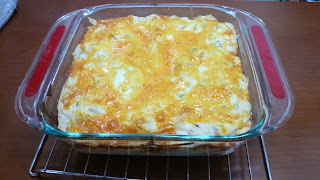 I love Enchiladas. It used to be that at every Mexican resturant I would order chicken enchiladas with red sauce. The red sauce started giving me heart burn however, so I found a great recipe for green sauce enchiladas. Then I moved to Korea and cannot find enchilada sauce. I was delighted on a recent trip back to America when my friend Laura served us enchiladas in white sauce. I could eat them without them eating me and I could find most of the ingredients in Korea.

Due to the ingredients I had available I had to modify almost every ingredient in her original recipe, but this is what I did. 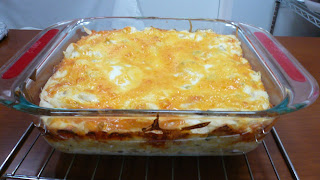 Bring the soup and liquids to a boil in a sauce pan. Stir the mixture until most of the lumps are out.
Add in the chopped meat and yogurt/sour cream.

You will layer the pan like you would for lasagna. Place some sauce on the bottom to keep the enchiladas from sticking to the pan. Then layer tortillas, sauce, and cheese, repeat tortillas, sauce then cheese two more times or until your pan is full.

The next time I make this, I will make it in the crockpot and see how long it takes.

If you are cooking this meal in America you may want to follow Laura's original recipe instead of mine:

3 lbs. cubed boneless skinless chicken breasts, cooked
1 container of sour cream
1 can cream of chicken soup
1 can cream of mushroom
1 8oz. can diced green chili's
soft tortilla shells
shredded cheddar cheese
combine chicken, sour cream, cream of chicken, cream of mushroom, and green chili's in a bowl. In a baking dish, spread a thin layer of sauce on the bottom to prevent sticking, on the top of the sauce layer tortilla shells until covering sauce. Then add another layer of sauce and top with cheese. On top of the cheese add another layer of tortilla shells. Then add a layer or sauce, and top with more cheese. Bake, covered, at 350 for 40-45 minutes. 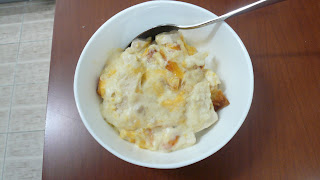 Be careful when buying yogurt in Korea. I use plain yogurt instead of sour cream because it is cheaper and I can buy it in smaller quantities. This time we accidently bought the wrong yogurt so our enchiladas had a sweet taste to them. Since I was using turkey it reminded me of cranberry sauce.
Posted by Chris and Jenn at 1:17 PM