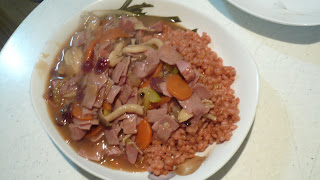 Chris and I love food. We have tried dieting off and on for the last three years since we got married but nothing seems to take the weight off. We have decided to take a different method to dieting. Instead of depriving ourselves of the things we love, which we would only be able to do for a limited amount of time, we have decided to add healthy things to our diet instead of taking bad things away. Our theory is that if we had enough healthy items we wont have as much room for the bad stuff, but can still enjoy them once in a while. We are not going to diet we are just adding good things to our menus.

A few months ago, I was reading an article in the Kids Times about how healthy barley is. I had never cooked with it before, but decided to give it a try. Koreans really like barley and drink lots of barley tea. Chris tried the tea when he was sick, but said it tasted too grainy. So I decided to look up some recipes. I found several. The next step was to find barley. Most American recipes calls for Pearl Barley. I could not find it. Instead in Korea I am using Sweet Barley.

Start with the Pilaf, it takes some time to cook.

In a frying pan heat the oil. Add the garlic and sauté  for 1 minute. Add the barley and cook for 2 minutes. Add the cranberry juice, broth and grated orange peel. I grated the orange right over the pan. Bring it to a boil. The next step it is lower the heat and let it simmer for 45 minutes. I don't have the space or proper pan to do this so I throw the mixture into my Crockpot on low for 45 minutes and the barley comes out just right.  This also leaves the frying pan available to make the ham saute. When the 45 minutes are up add the cranberries, almonds and orange slices to the pot and cover and cook for 10 more minutes.

Sauté the onions, celery, carrots and mushrooms for 1 to 2 minutes in olive oil.  Add the chicken broth and bring it to a boil for 3 minutes.


In another bowl combine the cornstarch with the remaining ingredients minus the ham.  Add it to the pan of vegetables. Cook until thick about 3 minutes. Add the ham and stir until the ham is warm.


Serve over the Barley Pilaf. 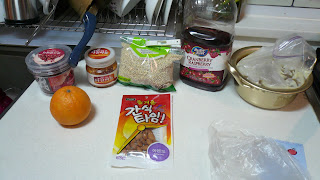 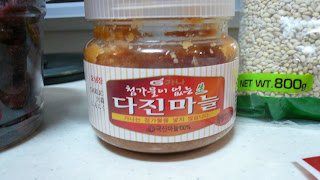 You can find lots of garlic in Korea, we often purchase fresh garlic that has been peeled but not chopped. In this recipe we used minced garlic. 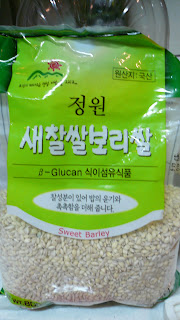 It took me awhile to find barley in Lotte Mart. Then I found it clearly marked in English. I could not find Pearl Barley which most American recipes call for so I used Sweet Barley instead. It works great.

I could not find Cranberry Apple Juice. I used Cranberry Raspberry instead. It is a little pricey compared to other juices. You could also use orange juice.

You can buy chicken broth in Korea but it is expensive. Instead I reserve the broth from previous chicken recipes and freeze it until I need it. Here is my Chicken Recipe.

We found these dried cranberries at Lotte Mart. The were more expensive than the ones we found at Home Plus the week before. The Home Plus cranberries also tasted better.  Here is a picture of them. Please excuse the melted butter and brown sugar that wanted to get in the picture. 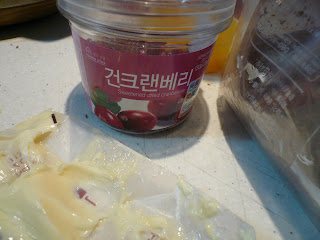 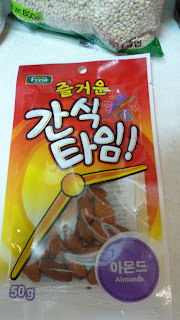 We could not find sliced almonds or roasted almonds. So we bought whole almonds. In this recipe I chopped them up in the blender. I didn't not roast them. Next time I will try slicing them and toasting them in the toaster oven
Posted by Chris and Jenn at 8:11 AM